My emersed setups changed a lot in time. Baby steps – 4 liters pickle jar and several small pots for various plants. Then in approx mid. 2011 it was a 30 or 40 liters old and leaking tank. In 2012 I have changed it to another 40 liters tank and finally in mid 2012 (?) I used a 80 liters tank (current setup). But as you know it yourselves – it never is enough. Therefore I added several “temporary windows setups” – or lets call it DIY window domes…but they are becoming more permanent than temporary.

I am planning a new emersed setup, a bit larger (at least twice ?)…in the near future

My current setup is placed near window (but you cannot have too much light, right?), so I also use a Compact fluorescent light bulb (32 Watts, they write it is 2250 lm) with metal reflector all over. I have not found a perfect fertilizer yet, but I am using a local NPK fert or I mix it myself.

DIY window domes are placed on the window ledge.

As a substrate I used several mixtures –

There are just tiny plants due to the recent changes in light and nutrition. It will regrow soon. 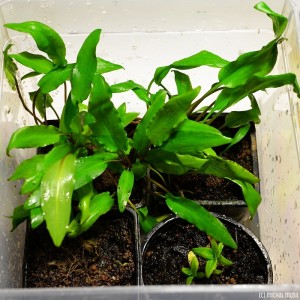 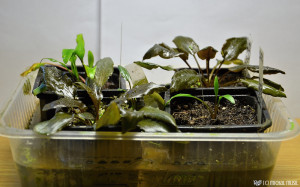 In emersed form it is not that beautiful, but I added more light. I am looking forward to see how it changes.

Since January it grew a lot. Hoping to see a spathe next summer. 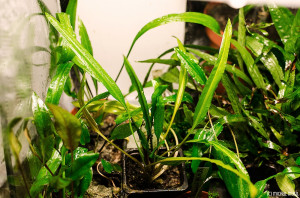 Here it was in my emersed window setup.

I have Cryptocoryne albida (or C. costata if you prefer) for some time. It grew quite big, but since I neglected my tanks during summer it was nothing fancy. Recently I have started to add CO2 and PMDD again and the results came quite quickly. New leaves are turning red/brown and the plant became huge.

It is placed in my tank “Metamorphoses“.